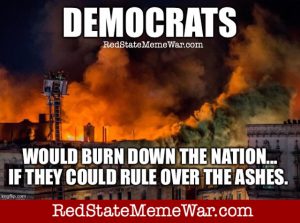 Democrats would burn down the nation… if only they could rule over the ashes.

Immigration is  a perfect example. Democrats are proposing radical legislation including decriminalizing entering the US illegally, and giving illegal immigrants free health care. Other examples include getting rid of the Electoral College, packing the Supreme Court  and removing citizenship questions from the US Census.

Make no mistake, this is by no means done for the benefit of American citizens. This is done solely for Democrats to acquire and maintain power.

Estimates show that more than 75% of all illegal immigrants would vote for Democrats. That’s a voting bonanza. So Democrat leaders pursue that block at all costs. Even at the expense of US Citizens.