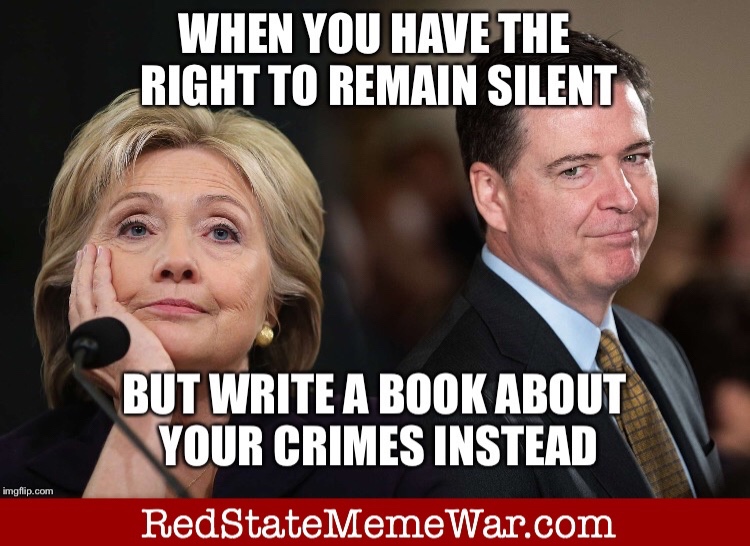 When you have the right to remain silent… but write a book about your crimes instead.

Fired FBI Director James Comey recently announced that he’s coming out with a new book – A Higher Loyalty, Truth Lies and Leadership, <chuckle> in which he proudly announces that he’s basically above the law – and honorable for being so.

It’s interesting timing for a book release detailing his involvement in the Clinton email scandal and the Fusion GPS dossier. The Justice Department Inspector General recently announced that Mr. Comey is under investigation for illegally leaking classified information.

My judgment was, I need to get that out into the public square. I asked a friend of mine to share the content of the memo with a reporter. Didn’t do it myself for a variety of reasons. I asked him to because I thought that might prompt the appointment of a special counsel.

It’s important to note that anything Mr. Comey says in his 293 page book can be used against him during the investigation. Who else gets the feeling that Comey may have been better off not saying anything? I’m guessing whoever advised Comey that it would be a good idea to write this book is the same person that advised O. J. Simpson to write “If I Did It – Confessions of the Killer.”

Finally, have you seen this? If Comey thinks he’s in hot water with Republicans, the RNC put together an entire site quoting Democrats bashing Comey as well.

“I do not have confidence in [Comey] any longer.” Chuck Schumer

“The FBI director has no credibility.” Maxine Waters

“Maybe he’s not in the right job.” Nancy Pelosi

If you offer me a penny for my thoughts... I’ll have to give you change back   I support our veterans. They keep our pets healthy.   Bread goes in. Toast comes out. Where does the bread go?   My sister doesn’t know if she’s having a bo...

Peruse and enjoy the following Joe Biden Memes! MSM raising the Joe Biden at Ewo Jima Joe Biden: Russian meddling wouldn't have happened under my watch! You were the Vice President when it happened!   Joe Biden in Driving Ms. Crazies Turn Left!...